3 Tips for Being More Productive

Just as a Medieval king would gnash at a roast drumstick, downing wine and laughing through every bite at the royal jester’s foolish antics, you can indulge in live entertainment over a grandiose meal, too. Put aside your tasteless TV dinner and turn off the screen to experience something far better! Dinner theater is a unique form of entertainment in which audience members are served a savory multi-course feast while watching hilarious and awe-inspiring spectacles on stage.

Few would suspect the Great Smoky Mountains of Eastern Tennessee to house the best place on earth for dinner theater. Yet, Pigeon Forge is known as the dinner theater capital of the world for good reason. The circus acts, live music, theatrical performances, and comedy shows in Pigeon Forge see thousands of audience members every year. The next time you’re traveling to these beautiful mountains, you, too, can chow down with fervor, reel in your seat, and laugh along to dinner theater shows like these! 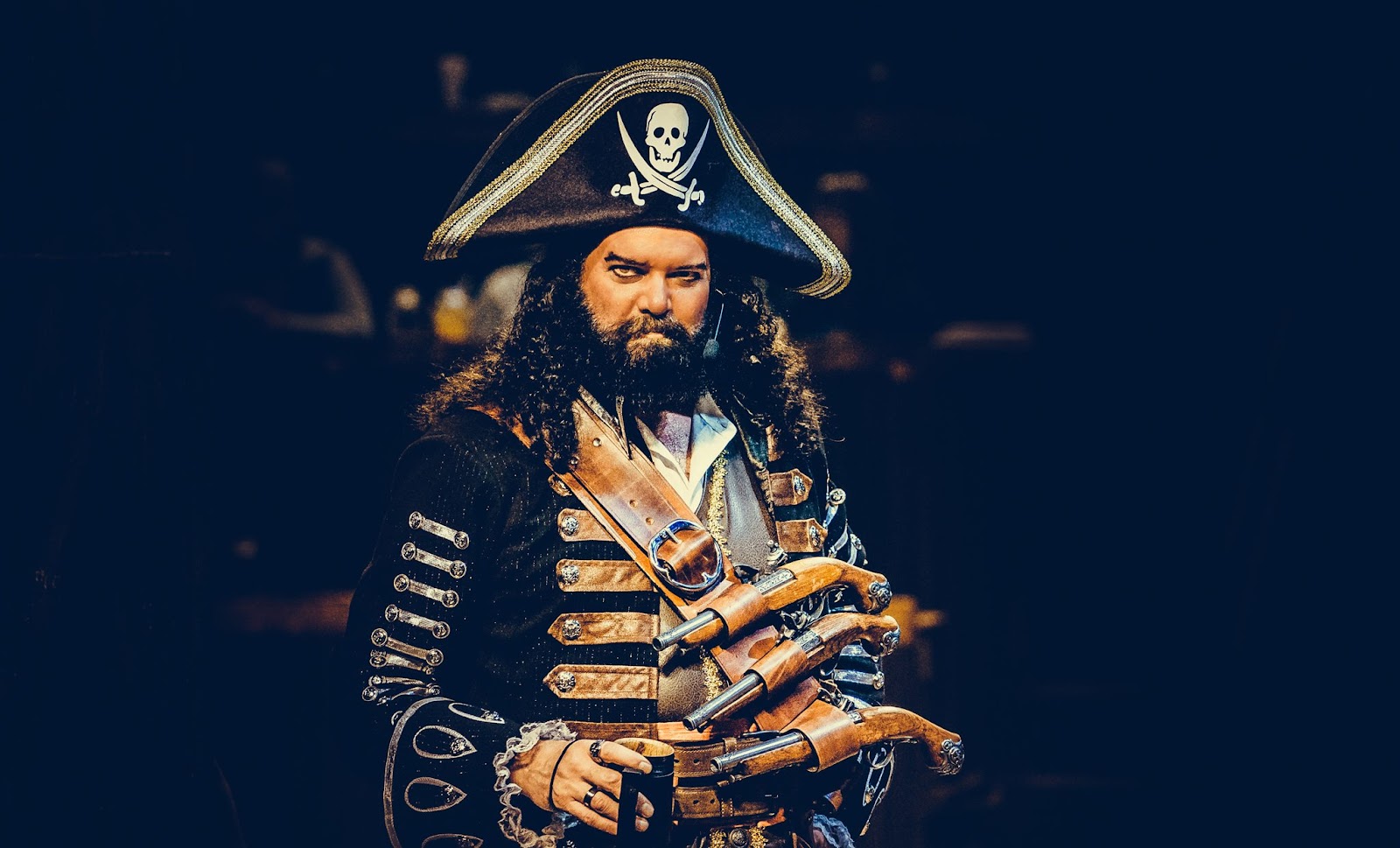 Swords will clash, and cannon fire will be exchanged in an epic battle across the high seas, dry land, and the swarming decks of the Crimson and Sapphire! As the smoke clears, only the legendary Captain Blackbeard and Calico Jack may step forward to lay claim to Davy Jones’ treasure, long-lost to the depths of the violent seas. At Pirates Voyage Dinner & Show, you’ll embark on a fantastical journey with these swashbuckling friends through the flames of a 15-foot indoor fire lagoon, risky encounters with evil skeletons, and magical meetings with silly sea lions and enchanting mermaids. Sit back and let your imagination run wild as you savor a four-course feast of fried chicken, sugar-cured ham, corn on the cob, herb-basted potato, peach turnover, and other Southern-style favorites. 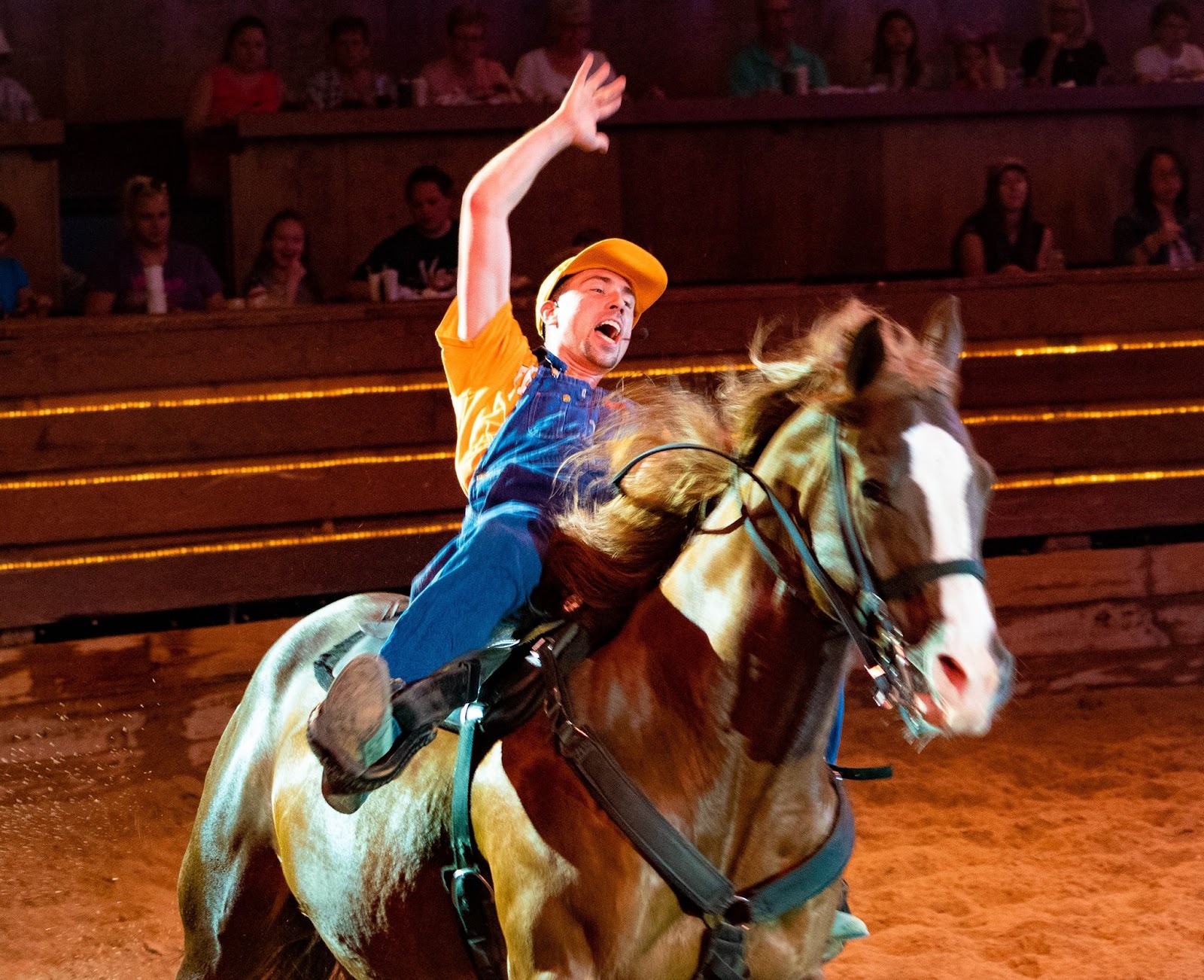 If you’re a fan of horseback riding, you won’t want to miss Dolly Parton’s Stampede. At this barn-themed venue, you’ll be delighted to find a cast comprising 32 gorgeous horses! Meet the starlets along the Horse Walk before the show begins, and then take your seats to watch their true colors revealed on the stage. The talented horses and their riders perform thrilling stunts in spirited yet friendly competition, set to dazzling special effects and musical entertainment. If your nose perks up to the mouth-watering smell of rotisserie chicken, hickory-smoked barbecue pork loin, fresh-baked cheddar biscuits, and other country-style side dishes, you’re not imagining it. Dinner is served! 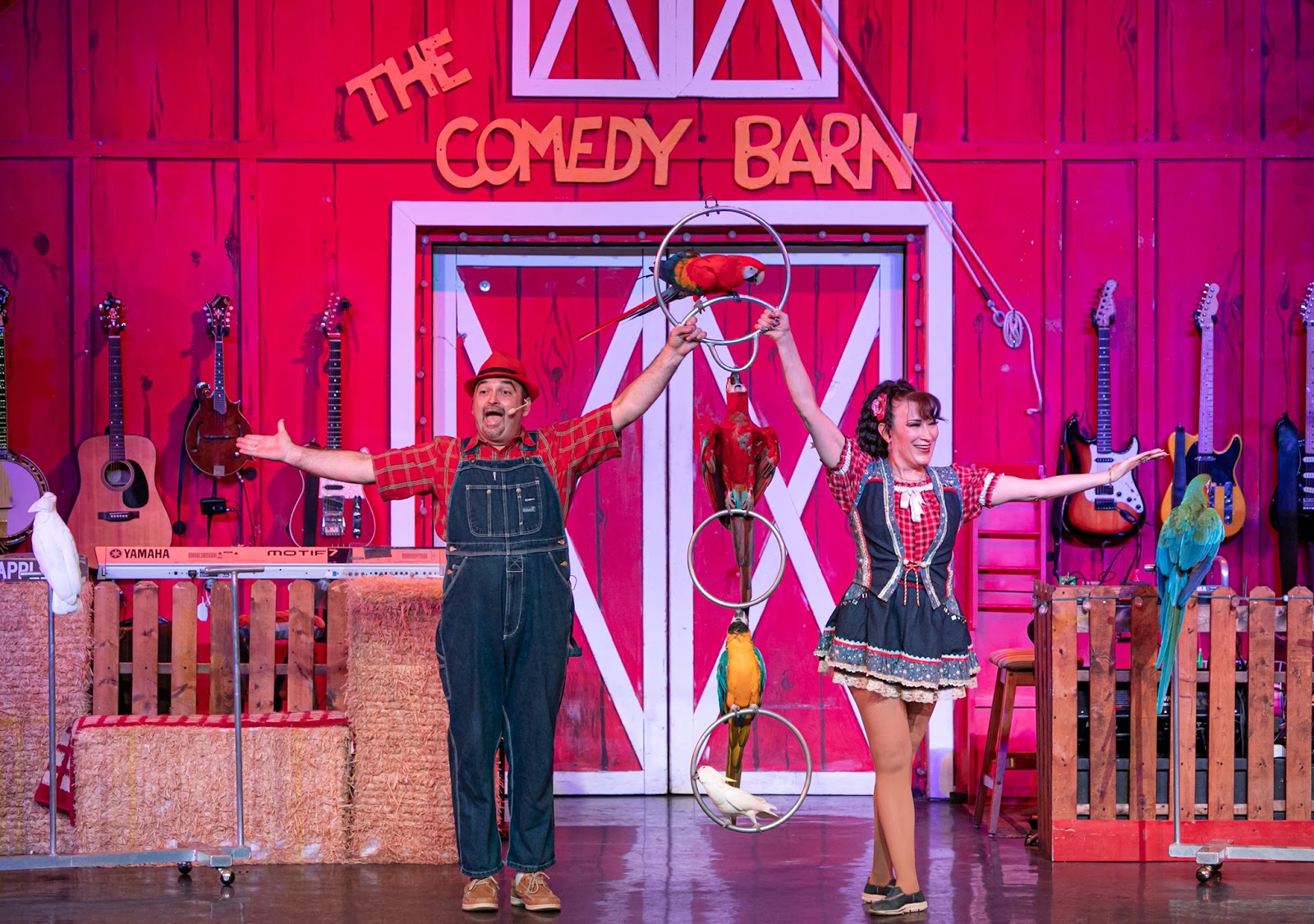 In this neck of the woods in Eastern Tennessee, rustic locales are a dime a dozen, and Dolly Parton’s Stampede certainly isn’t the only one. Enter a literal barn at Comedy Barn, and witness the pros bringing hilarity to the haystacks in a clean comedy show celebrating over 25 years of success. The signature show at Comedy Barn features magicians, ventriloquists, singers and dancers, barnyard animals, jugglers, country and gospel music, and, of course, the funniest comedians in Pigeon Forge. An excellent activity to do with kids, this 2-hour high-energy performance has folks of all ages breaking out into side-splitting giggles! 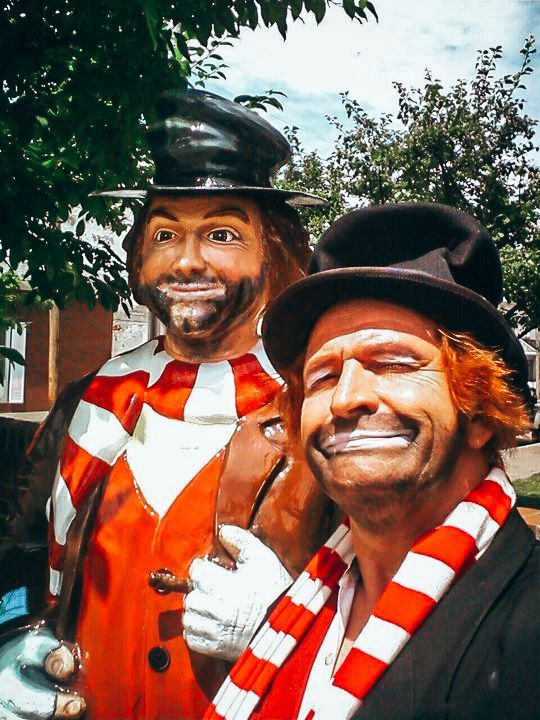 Once a magnate of film, television, radio, and stage, Red Skelton was a household name throughout the ’50s, ’60s and early ’70s. His vaudeville-style clown acts, observational humor, and unforgettable characters turned him into a legend in the world of stand-up comedy. Though he may rest in peace now, his timeless sense of humor still earns belly laughs at the Red Skelton Tribute Theater in Pigeon Forge. Brian Hoffman plays Red Skelton in a one-man stand-up comedy show, bringing back to life memorable characters like Gertrude & Heathcliffe, Freddie the Freeloader, and Cauliflower McPugg. As the only place you’ll get to see Red Skelton’s work in action, Red Skelton Tribute Theater is a must-see for boomers and their grandkids!

The Luxury Guide To The High End Of London 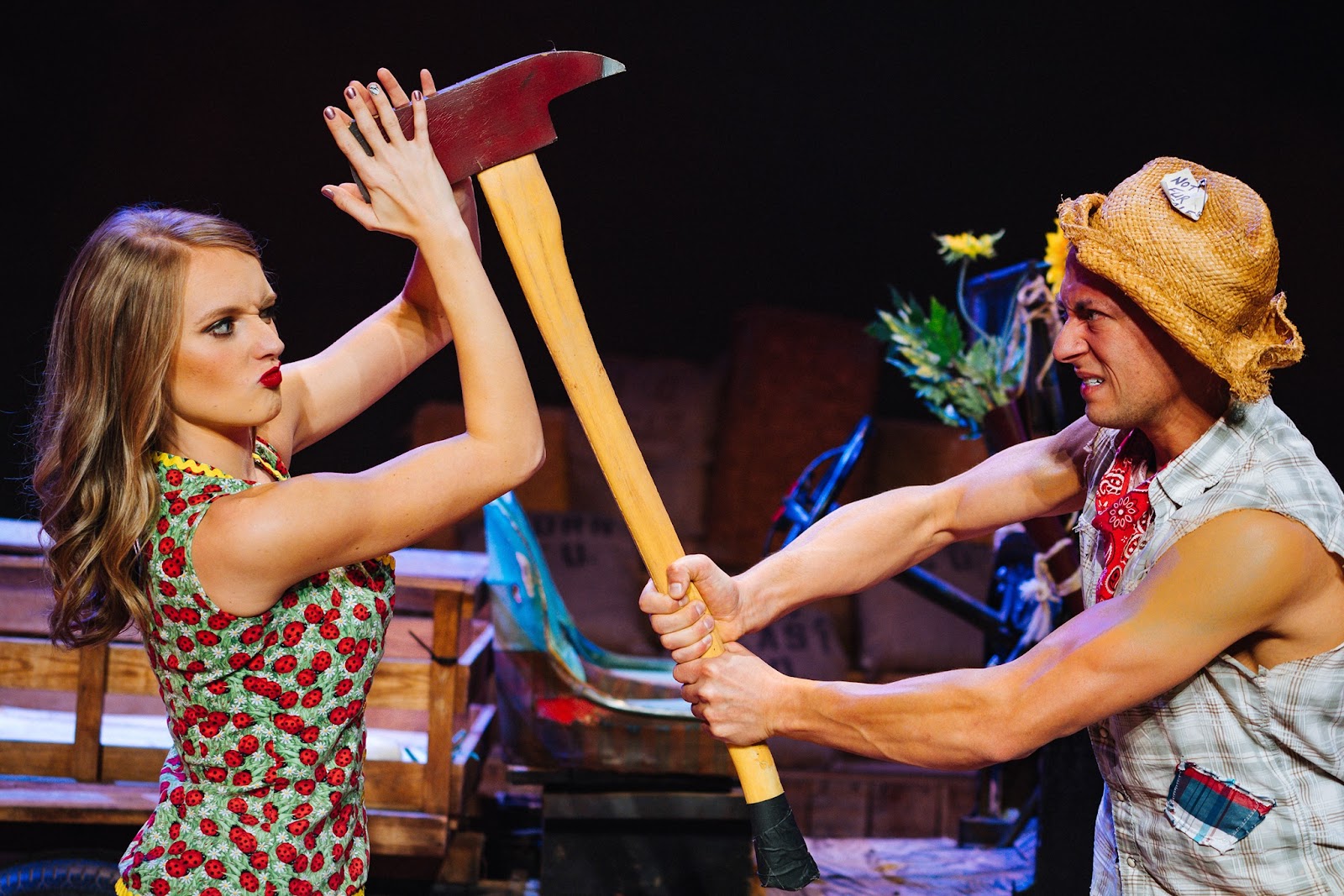 When it comes to comedy dinner shows in Pigeon Forge, Hatfield & McCoy Dinner Feud takes the cake. Revelry and insanity join forces to see two hillbilly families unite only in their downward spiral of mutual sabotage. Otherwise, the Hatfields and the McCoys could not be more opposed as they compete in absurd feats of strength, singing, mountain clogging, and stunts to win over the audience’s favor. Cheer on your chosen family of country cousins as they dive into higher and higher levels of feuding at the indoor swimming hole! In the meantime, mash away at the all-you-can-eat homestyle dinner of fried chicken, open pit pulled pork barbecue, Southern-style creamy soup, mashed taters, homemade bread, and more. 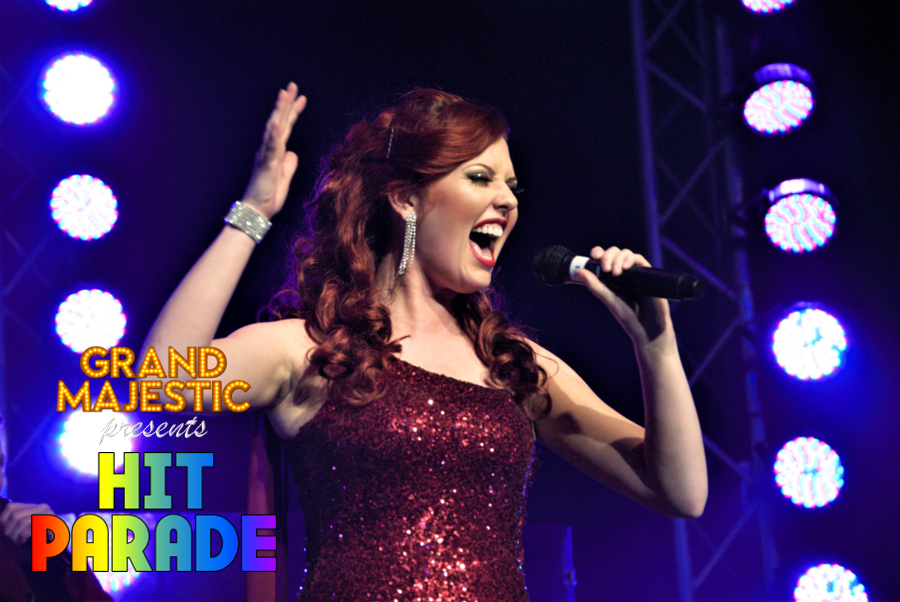 If live music is more your speed, the Grand Majestic Theater is a must! Between four family-friendly shows, you’ll have your musical quota filled in no time. Jam out to “Twistin’ the Night Away” and “The Green Hornet” at the Soul of Motown tribute show, or dance in your seats to the hottest jukebox bops from the ’50s through the ’80s at Hit Parade. Try something a little different at Terry Evanswood’s performance of magic tricks, sleight of hand, and grand illusions. If you are in town for the holidays, don’t miss ‘Tis the Season, a feel-good rendition of Christmas songs from traditional Gospel hymns to Elvis. Don’t forget to get there early to grab concessions, mixed adult beverages, and a dinner of chicken wings, burgers, and pork BBQ sandwiches. 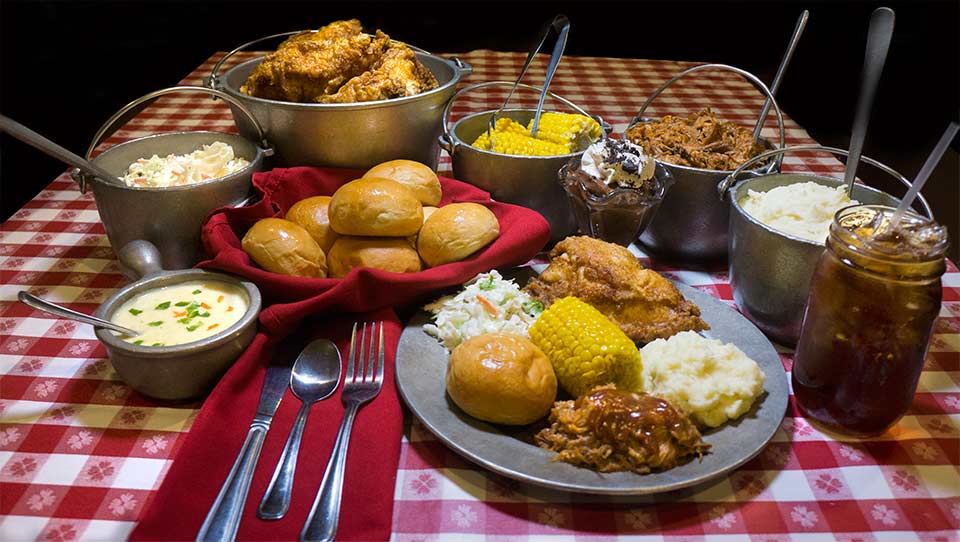 Though the concept of combining live theatrics and food is not a new one, Medieval kings would surely be envious of the standards established in today’s dinner theater world. In Pigeon Forge, TN, you’ll encounter high-flying stunts, dazzling costuming, state-of-the-art sound and lighting systems, world-class talent, and hilarious storylines. Plus, even a king’s roast pheasant is no match for the fried, crispy, buttery, sweet deliciousness that defines Southern-inspired cuisine. If you’re a theater kid at heart, a food enthusiast, or an avid traveler seeking unconventional experiences, the dinner theater capital of the world in the Great Smoky Mountains should be on your bucket list!